For the past two weeks, you have read many poignant and personal stories about our experiences in Russia. The travelers have opened their hearts, shared their feelings and have tried to bring each of you (blog readers) into experience in a very personal way. And in the coming days and weeks, folks will continue sharing their post-trip reactions and perspectives on the blog in equally powerful ways. You can expect to read very personal and serious accounts of how lives have been transformed.

However, fair warning…this won’t be one of those type of posts!

Every trip has their celebrity – you know, that one person who gets the loudest applause, who gets the most “press coverage” and overall, sort of serves as the “mascot” for the trip. It’s an honored role that is not bestowed by the other American travelers, but by the children and staff in Slobodskoy.

On our first trip to Russia, that celebrity was Norma. The kids still chant “NNN-OOO-RRR-MMM-AAA” every time a picture of her shows up in a slide show or a photo album. She is the patron saint of amateur Russian beauticians and a revered icon for the children and staff at the orphanage. They all await the second coming of Norma!

The celebrity on trip #2 was BJ – our tall, athletic, good-looking and humble former professional basketball player. I am not sure what the kids liked more: how tall BJ is or that it requires about 27 letters in the Cyrillic alphabet to spell the name “BJ”. Like Norma, BJ’s name was chanted by kids and staff alike when pictures were shown.

Well, this trip was no different. We indeed had a celebrity – and it was none other than our youth pastor, Rush Beam. Like the trips before, Rush was a reluctant but willing celebrity, selected by the kids and staff to serve in this important role.

But this time, the kids and staff at the orphanage ratcheted things up a serious notch. Let’s just say that there’s no longer “Bieber Fever” in Russia…they have renamed it “Beamer Fever.”

Now, for those of you who do not know Rush, he is an amazing man. He’s a relatively new member of our church staff but is already a valued member of the family. He has spent his whole life working with youth and is everything you want in a youth pastor – spiritual, outgoing, a little crazy, a little serious and a lot of fun. Plus, he has the all-time coolest name of any pastor, youth or not!

We also learned that Rush is a bit of a renaissance man – he sings, he dances, he paints and he plays a mean game of Jenga…all very valuable skills when in Russia. The kids at our church love him, the parents love him…and apparently, all of Russia now loves him! You sort of expected Ryan Seacrest to pop out on stage and say, “Slobodskoy, let me introduce to you – your new Russian Idol!”

It all started during this year’s big event, a school wide talent show we’ll just call “Russia’s Got Talent – Galina Style.” We formed teams of Americans and Russians and did skits, songs and dances to show off our collective talents. When all was said and done with the formal competition (and good news – “Friendship wins!!!“), Galina opened the stage for individual talents.

In the midst of break dancing from some of the Russian boys and songs from the American youth, Rush was coaxed onto stage to sing for the group. Using the talent that he honed over four years with an accapella chorus group at Davidson College, Rush belted out a passionate rendition of James Taylor’s “Carolina on my Mind” – and dedicated it to Galina. It brought down the house!

Galina was smitten from the very start. You could just imagine Galina mumbling those immortal words of Renee Zellweger, “You had me at hello!” (For you non-pop culture aficionados, click on the link). Here’s a photo right after the song with a classic Galina pose:

Galina reacts to Rush's version of "Carolina on My Mind"

Well, from that point on, it was “All Rush, All the Time.” He was an instant celebrity – paparazzi started showing up at the orphanage, the Russian “National Enquirer” had him romantically linked with three different Russian ballerinas (just kidding, Erin!!), the Russian National Futbol Club was renamed “Team Beam” and the new auditorium was christened the “The Rush Beam (formerly Alexander Grin) Memorial Hall.”

Perhaps the highlight of “Rush-a-palooza” was his final concert at the orphanage. On our last night there, the staff hosted our travel team for a special night of dinner and entertainment. We sang, we danced, we laughed at their skits and had a wonderful and festive time celebrating friendship.

As the evening was winding down, the crowd grew restless as they awaited one final song from the King. With lighters in the air and chants of “Encore” filling the room, Rush agreed to sing one final ballad.

With passion and grace, Rush did the most amazing version of “Amazing Grace” ever sung in Russia. Not only was it beautiful (truly) – it also included a new verse custom written for the occasion! We were tickled as Galina offered her interpretation of the words of the song (there was no translation) – complete with her feelings of love, war, Native Americans and guns. Needless to say, it was a memory that won’t soon be forgotten.

Rush was a good sport about all his new-found fame throughout the entire week. He accepted and handled the role of celebrity du jour with great aplomb and humbleness – and put up with all the good-natured ribbing that comes with such accolades. Yes, he even knows about this blog post and allowed it with his blessing!

But truth be told, these trips need a Rush…or a Norma…or a BJ. Don’t get me wrong – this is not to diminish the role that the “rest of us” play on these trips. God certainly uses those of us who CAN’T sing (or dance or paint) for great things at the orphanage, too 🙂 As a matter of fact, there were likely moments when each of us felt like a celebrity given all the hugs and kisses!

But in the midst of what can be an overwhelming journey fraught with emotional highs and lows, our special American “celebrities” like Rush can help set the tone for the week. They can break down barriers with shy kids. They can open up doors that may be otherwise bolted shut. They offer stories of how God is working in their lives, inspiring young Russian orphans to dream and aspire to greater things. And they share a part of themselves that endears them to Russians and Americans alike.

So, who will be the next Russian Idol? God only knows…literally. But we know that He is likely to select that person who can most quickly speak to the hearts and minds of the children and staff in Slobodskoy, opening up doors for all of us to share our love with them.

Now, as we go to commercial break, let’s take a look back at “The Week That Was”…Rush-ian style!!

Galina crowns Rush in a ceremony fit for a king. Long live the King! 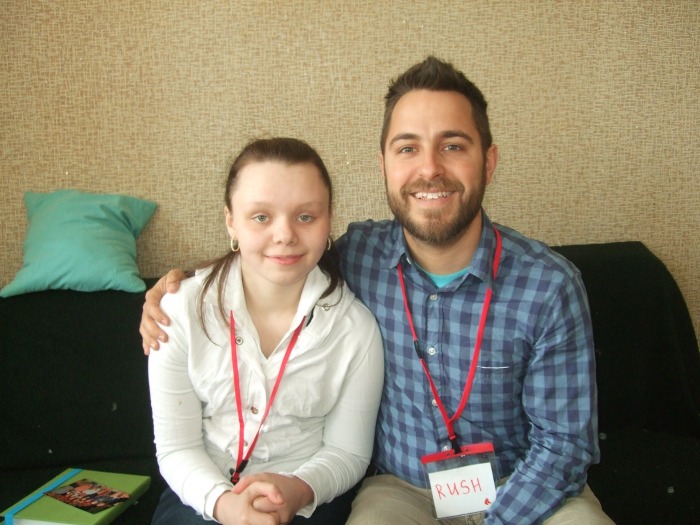 Rush with Dasha, one of the graduating orphans 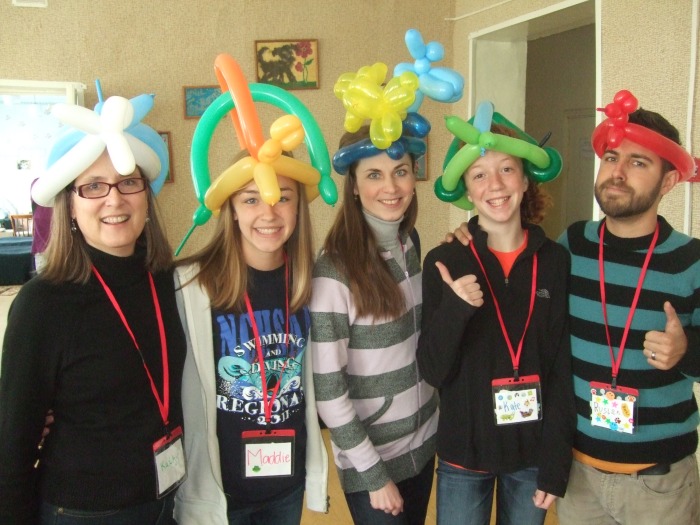 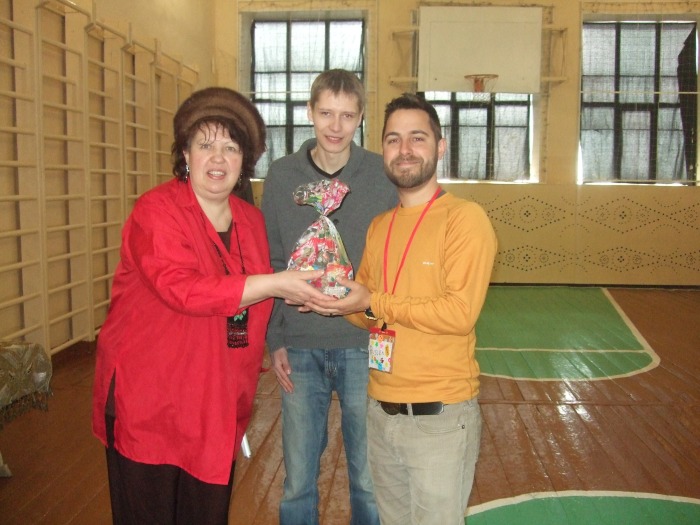 Rush being awarded "Mr. Congeniality" after the Galympics